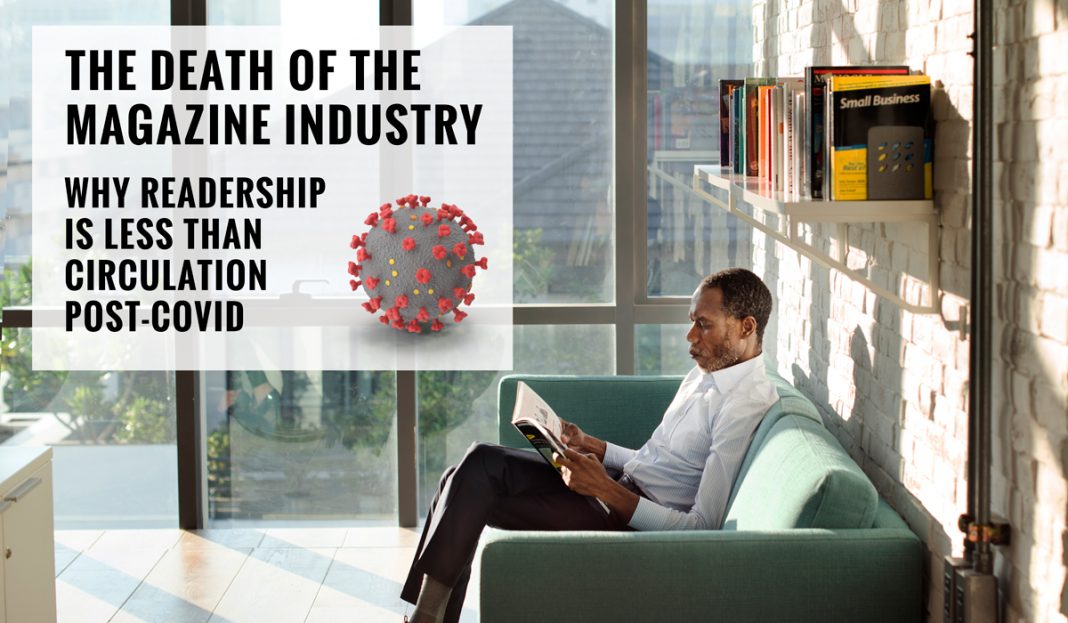 Print publications and magazine readership probably won’t survive in a post-covid world. The way that magazine publishers calculate their value to advertisers is completely different today than it was last year. Publishers depended on many people reading, handling, touching one copy of a magazine before 2020, but now it’s a completely different story. It makes print copies of publications not even worth the dead trees they’re printed on.

Some magazines publishers expect their print publications to be read by many people. for example a local “style and culture” magazine sitting in the waiting room at a doctor’s office might have many people read it. Alternately, a magazine that would only make sense in someone’s home, like a TV guide, might only be read, on average, by two people per copy.

But what happens now to print readership post-Covid?

What happens in the post-Covid world where the idea of handling a magazine, say for instance in a doctor’s office isn’t as popular as it once was?

I know I’m not going to be picking up magazines other people, especially people waiting in a doctor’s office, had potentially touched moment’s before.

What is happening now, in a post-Covid world, is dismal for print publishers who depended on readership far above their circulation. Whereas a glossy, high-quality, expensive to print magazine might have been handled by up to 20 people per copy previously, now it’s realistic to expect that number to drop tenfold. Publishers of those same magazines might be lucky if their readership is equal to their circulation now. People simply don’t want to touch magazines other people have handled before.

Think of someone reading a magazine and wetting their fingers to flip the pages. It’s positively terrifying in the middle of a pandemic, to pick up a magazine that’s been sitting in a doctor’s waiting room. Nobody’s going to do it. If the doctors of the practice are worth their salt they won’t have any magazines in their waiting rooms at all any more.

Same goes for newspapers. They used to calculate their readership above their circulation. Not any more.

There’s always been a culture of “dishonesty” that’s plagued unscrupulous publishers. They haven’t been shy about exaggerating before, and today’s post-Covid world isn’t going to help them be more honest.

Back when I created Mi360, a tool to measure the effectiveness of online and offline publications, I did it because we had to compare apples to oranges. Was an online ad buy as effective as an insertion of an ad into a print publication? That was the question I was answering for my clients needing to advertise. I wasn’t going to spend millions of their dollars not knowing. Does an online publication have the readership, and therefore the effectiveness, that the publisher claimed it did? It was an eye-opening tool. It revealed to me that the honesty of publishers was a rare and precious commodity. The overall trend among all publishers, was to participate in the industry-wide practice of exaggerating. They had to exaggerate or the story they had to tell their advertisers would look bleak compared to their competition, and they wouldn’t get the advertiser. It made me have sympathy, pity for them compared to online publishers. I saw the industry slowly fading away from the dominance they once enjoyed. I cannot see how Covid isn’t the final nail in the coffin for print.

There’s only one thing I can say to publishers who are still relying on dead trees to create value for their customers, the advertisers: up your online game. It’s the only game moving forward. If you’re a publisher who needs help transforming your publication to an online success, contact Massive Impressions. My company has been helping publishers get their online game right, and doing it for pennies on the dollar compared to depending on dead trees.

IMPORTANT ADVICE to yesterday’s readers of magazines: don’t touch those things. You’ll get coronavirus. Protect your neighbors. It’s not about your right to read, lick your fingers and flip through pretty pages. It’s about your responsibility to your community. Never touch a print magazine or newspaper you see lying around again. Buy it if you want to read it.