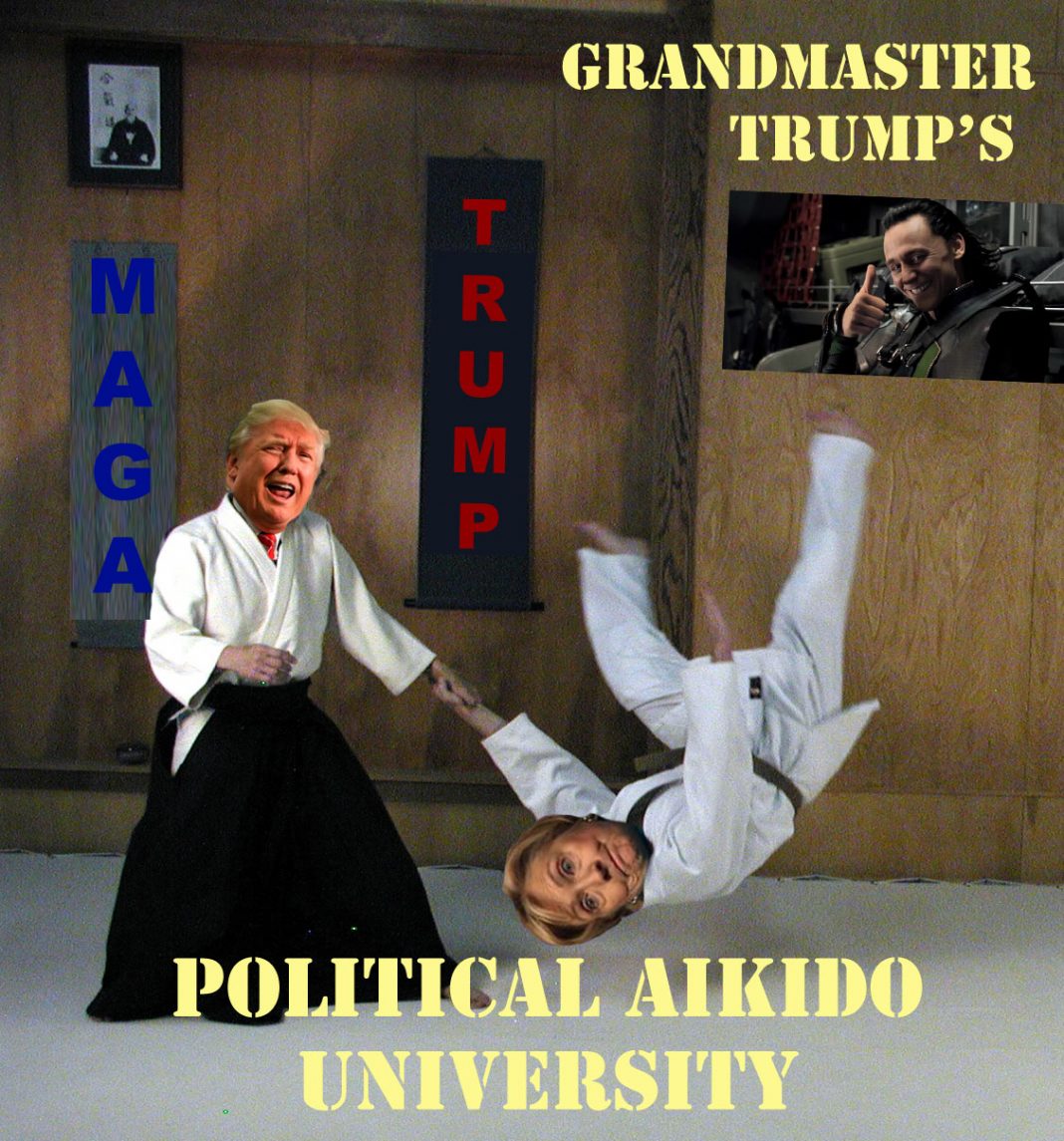 I’m going to tell you what was most significant about this election: how well the Trump Campaign Strategy did relative to the amount of money he spent. He’s revealed a way to get massive returns on investment, using your competition’s budgets against them. I’ve been paying close attention to this race, and this is what I believe is the biggest take-away, a valuable lesson for free that didn’t require enrolling at Trump University. It is an approach to marketing  and campaign messaging that’s incredibly lucrative if leveraged right. It’s worth learning about. It’s worth trying, and repeating if it works for you.

More importantly it changed the equation on how political ad spending yields return. The correlation between ad spending and campaign results is weakening. The Trump Campaign’s became a giant threat to traditional ad vendors: newspaper publishers and broadcasters. I’ll explain why they could never bring themselves to support him, because in a way he’s stealing their lunch.

The Election of 2016 has allowed Donald Trump to get unprecedented amounts of attention with a relatively minuscule investment. He used his competitor’s time and money against them, growing his numbers while his competition eroded theirs in an effort to distance and distinguish themselves from him. I’ll examine the way it was accomplished, the way he became the Republican Party candidate, and the way he continues to draw giant numbers to his rallies. Whatever your political opinions are regarding him, the Donald Trump Campaign Strategy is valuable to understand.

There’s never been another political candidate in our time who’s invested so little in their campaign, but seen such massive gains in followers, except Eisenhower, and that was because Ike was lofted in as a war hero. There’s never been a more revolutionary and enlightening example getting record-setting return on investment by taking unprecedented risks.  In hindsight, once you examine the results and watch the dynamics between competitors, what seem to be risky, careless moves, are actually part of a well-planned strategy that leverages human psychology on a masterful level.

Here’s what we know today, in November of 2016, a month before the Presidential Election in November:

In Kung-Fu, there’s a style of fighting called “Drunken Style” which baits the opponent into believing there’s a loss of control, when there actually isn’t. There’s another form of martial arts called Aikido, where an opponents energy of attack is re-directed and used against the opponent. In a political sense, Donald Trump is using very similar approaches to synthesize a campaign based on getting his opponents to spend their money to improve his numbers.

You can argue all day about what kind of a candidate Donald Trump is, or how good or bad his policies are. From a marketing perspective, completely budget based, that’s irrelevant. It’s irrelevant because this strategy isn’t limited to Donald Trump, or to politics, but could be leveraged by anyone, even outside politics and marketing. It’s not a political strategy per-se, but a promotional strategy with wider application.

Here’s a simple breakdown of how Donald Trump did it in his political campaign:

I had one of those Ronco Showtime Rotisserie Chicken Cookers. Ron Popeil promoted these like crazy back in the nineties with the phrase “Just Set It and Forget It”.   I loved it. It was a great way to cook a chicken. Even though it was a product that delivered, and you essentially could just stick the chicken in, set the timer, and come back to a cooked chicken, it had this little sticker on the top. The sticker said “Don’t take ‘Set it and forget it’ literally.” That was the funniest sticker to me.  Poor Ron, he makes this awesome product and then has to put this silly sticker on top. Ron had a “Set it and forget it” product, but still had to disclaim it. Someone must have left it in front of some curtains, or set a towel on top, and forgot that the rules of physics apply.

The “Set It and Forget It” strategy was similar to what worked for Trump. However, Trump doesn’t have to disclaim his strategy because the effect is intended to set the curtains on fire in his audience’s mind. If there’s a negative reaction, you become his ambassador. The more negative, the more vocal the reaction from his opposition, the more return Trump gets from his strategy. From a marketing perspective, it’s brilliant. When you’re a marketer, and you’ve got a budget to work with, your goal is to get the maximum return with the minimum investment. There’s arguably no other metric for success than ROI, return on investment, return/investment.

If I had another marketer approach one of my clients with the ability to get numbers better than mine, and demonstrate a tenfold return on investment better than I could yield, how could I debate the merits of being loyal to me? If he was my competition, another marketer with the ability to do better for my clients with less money, I’d be obligated to bow out at a minimum, or humble myself if I had an opportunity to learn.

If you can get your opponents talking enough about you by saying the right things, you can get big sections of the audience moving in your direction with a seemingly effortless or careless statement. On the surface it might seem careless or effortless, and in political terms, risky, but if it’s well thought out and resonates with the audience, it’s brilliant.

Why is Donald Trump serious threat to media?

Advertising has always been the big effort in political campaigns. Campaigns have traditionally been about raising money, creating messages, and broadcasting those messages via paid advertising in the most effective locally targeted strategy. This is the reason campaign funds are raised, and politicians make the biggest promises to their biggest contributors. Dirty politics and corruption were always seen as the necessary evil for even the most virtuous candidate to get their chance to champion social justice. This traditional political game has been about getting the biggest mass of money behind a candidate to give their message the biggest chance at reaching the voters that mattered.

Donald Trump made advertising worth less. That’s the last thing in the world media wants.

Think about it: for decades ad spending has correlated directly with garnered support. For Trump, that correlation is broken. He got a lot of support irrespective of the fact that he spent half as much as his opponent. Could he have even spent less and done just as well? That’s a scary thought if you’re a media owner and your profit is tied to your ad sales. If candidates don’t have as much faith in spending on broadcast media, and focus their dollars in digital media, smart PR, or grassroots efforts. that takes money directly out of newspaper, radio and TV revenue. It’s no wonder no newspapers support him, he’s as much of a threat as Craig’s List was, the black hole their classified bread and butter revenue disappeared into.

It was completely unexpected for a candidate in to come along and demonstrate a means to change that money-driven equation, and even turn it upside down against itself. But today we have seen it demonstrated by Mr. Trump. Whether he wins or loses is irrelevant. Just looking at his numbers now reveals a new dynamic, a new vocabulary we were unaware of as much before.

Let’s just break it down to the bottom line: How much money was invested and how much support was gained?

Early Numbers:
As of June 30th, as per the Washington Post, the Clinton Campaign has raised $287.4 million directly and $108 in SuperPACs. Trump comes in much lower in spending, only raising most of the money recently, measured at $89.4 million and has only benefited from $8.4 million being raised by SuperPACs.  On social media, Trump’s followers are about 10.3 million  while Hillary Clinton’s are only 5.5 million. On Twitter, his follower count is 10.9 million followers and hers is 8.3. Although all major establishment polling organizations are reporting a single digit Clinton lead at this time, a recent ABC online poll revealed Trump’s numbers around 70% while Clinton’s came in at around 8%, beneath Jill Stein and Gary Johnson.

Late Numbers:
In the weekend before the election, at the time I’m publishing this post, the numbers for the two top candidates are very close. The table below reveals the final amounts spent up until this point. Let’s compare how much they’ve spent to how well they’re doing so far:

This isn’t like a regular marketing campaign where the goal is profit, so the ROI isn’t exactly clear. What we can do though, is compare the ratio of amount spent to the percentage of national support a candidate achieved. The numbers in the table above were drawn from two sources. OpenSecrets.org revealed the spending amounts. The percentage of support for the candidates was drawn from BBC.com. When we compare the amount spent to the percentage support it achieved, Donald Trump’s spending yielded 2.13x the return on investment compared to Hillary Clinton’s spending.

What this allows us to conclude is that the strategy and tactics employed by the Trump Campaign are worth studying more. It’s difficult to cover all the facets that caused this wide disparity in return on investment. I’m sure this will be debated, academically, for decades to come. My role, as The Click Whisperer, is to point out events and phenomenon I think are truly revolutionary. This is one of them. Once you understand the Donald Trump Effect, you might be able, under the right conditions, to put it to work for you.

Why make a Google+ Page and a Goo.gl shortened URL pointing...