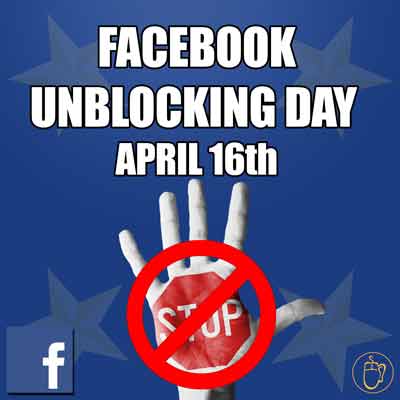 Now that snail mail is nearly dead and greeting cards have been replaced by snarky memes, our Holidays and communication traditions need to evolve. Here are a few ideas for useful holidays in our new, social media driven society. These are exclusively Facebook Holidays, and wouldn’t make sense on Twitter or other social media sites. If you’ve used Facebook up until now, you might notice that it becomes an echo chamber after a while. These Facebook Holidays have a practical use, they help keep your experience on Facebook fresh and engaging through these yearly social maintenance events.

This is the social media day of forgiveness. Unblocking Day is the day when you forgive all the people you currently have blocked in Facebook; you Unblock them. This is where you give them another chance to be part of your world again. It would be nice to reach out to that person, in a Post or a Comment to one of their Posts, and let them know that you’ve unblocked them. It’s not polite to mention why you blocked them in the first place, at least on Unblocking Day.

Keeping someone blocked, especially in a debate type Group, is the weakest social behavior you can engage in. It signals your mental inferiority to the person you blocked, acquiescing that they’ve defeated you. It also concedes that your positions towards the things you support couldn’t be weaker. If you Block, you’re a loser, and bad things will happen to you – like Karma on steroids. Don’t give up, Unblock.

Everyone wants to see what you look like now. Selfie Day is the day when you take a new picture of yourself looking the best you can. This means new clothes, new hairstyle: looking good. Let everyone see your best side. Get ready for the summer at the same time. Selfies don’t necessarily mean you have to take the photo yourself. Professional photographers can make you look great. Help your local retail and service economy by helping yourself.

Every good thing comes to an end. So goes Facebook Friends. Some you have just had enough off, and if they’re not engaging with you then they’re just dead weight. If your posts get shown to Friends who don’t click or Like then your Posts won’t be shown as much in the future, to them or to others. So get rid of the baggage, Unfriend. What’s great about Unfriending Day is that it’s the one day a year where you can use the excuse of Edge Rank, and not make the Unfriending personal. If someone finds that you Unfriended them during or after Unfriending Day then they really need to be honest and assess how much they’ve liked or commented on your Posts. Seriously folks, if you want to be Friends on Facebook, be friendly and throw your Friends a Like.

Some people are very Facebook Shy. They have few Friends and won’t reach out to people to make new Friends. They wait for other people to Friend Request them. They’re missing out on one of the most amazing features of social media: meeting new people. Friend Someone New Day (FSND) lets Facebook users join the fun without feeling odd about reaching out to others they don’t know. You can either find people in Groups or “poach” Friends of Friends.

Groups are the new cool thing on Facebook. Everybody’s joining them, doing social media marketing, and/or just having fun. You should join Groups too. Groups let you talk to other people who are interested in your nonsense. Don’t torture your Friends and family with stuff that less than 1% of the population wants to hear: stuff about politics, religion, and your kinky or boring habits. Groups let you share your passions with other people who are passionate about the same stuff. In Group Joining Day you actually promote the Groups you like the most to your Friends, and take the time to join Groups that they’re promoting and others you find through searches. This new tradition involves social endorsement and expects you to reciprocate in turn, kind of like giving gifts on the Holidays.

Untrusted? Get Ugly with your E-mail Designs.