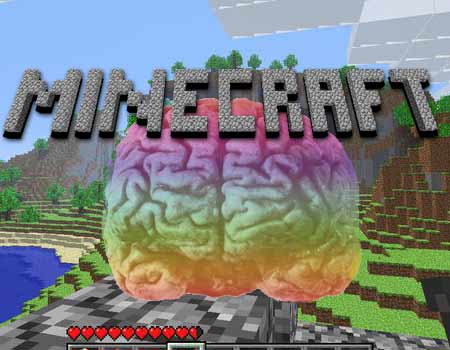 Everyone dreams of their promotions “going viral”, but most intended to don’t. Why?
When a promotion goes viral it shows ROI orders of magnitude greater than those that don’t, but how do you get a promotion to go viral? Capturing the essence of what makes something more or less viral isn’t so easy. Most marketers don’t understand what viral really means and often fall short in their promotions intended to be viral. A recent video game, which hasn’t technically been finished yet illustrates one of the secrets to “being viral,” and can hopefully enlighten marketers how to make their promotions “more viral.”

A recently developed game, Minecraft (http://www.minecraft.net), has been a personal fascination for many reasons, but is particularly fascinating in the way that it’s features have created a viral, self-promoting mechanism.  It’s a relatively small game written in Java and can be downloaded in minutes with a fast connection. Amazingly while  still in its “alpha” stage, meaning the developer (singular) hadn’t finished adding features, it still sold over 650,000 copies at 10 euros apiece. The developer hasn’t engaged with any of the major video game publishers at this point and still sells the game exclusively on his own servers. To say that it’s success is unprecedented is an understatement.

What then is the appeal of this game that has made it so successful? Why can a small indie developer achieve a level of global market penetration with an “alpha” product that no major publisher would ever dream of? It’s success is a viral phenomenon and therefore becomes valuable to analyze from a marketing perspective. 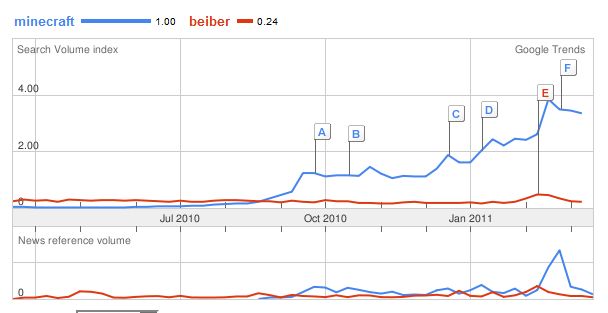 The graph above shows, in blue, the relative number of people searching for the term “Minecraft”. The term “Beiber” was charted alongside it in red for comparison sake . Note how the blue line curves abruptly upward between August and October? That’s the hallmark of a viral phenomenon – the exponential curve – the chain reaction of sharing.

Why then is it viral and what can a marketer learn from it? Minecraft, or more specifically the promotion of it, can be recognized as a viral phenomenon whose magnitude is illustrated by the hundreds of thousands of videos on YouTube created by it’s fanbase. When comparing other popular, bestselling games by the major publishers, it seems that the more scripted the gameplay, the less videos fans make. Why would Minecraft enjoy such a prolific fanbase compared to big-ticket games?

The secret to its viral nature lies in the nature of the game itself. Minecraft is a building game, a sort of digital Lego world on steroids. Imagine being able to build anything you want with a virtually unlimited supply of building blocks. Then add a fractally generated world with mountains, oceans, waterfalls, lava and the ability to create items from these blocky resources. Pack all that inside a plenum that mirrors rudimentary real-world conditions: water flows, items fall, there’s a sky, a ground, clouds and spooky caves that nobody has ever explored before. Make a waterslide. Make a rollercoaster. Use the magic “redstone dust” and create logic circuts – even a 16 bit computer that works!

The game’s fans have used the simple plenum of the game to express themselves – that’s the secret. It’s not just a game – its a new medium for expression. People share their experiences and works from within the game as a way to express themselves. Look how clever I am. Look how creative I can be. Let me make a video of it and upload it to YouTube, which in itself exemplifies an even more basic sharing phenomenon.

The takeaway lesson is thus: Features that allow your audience to express themselves uniquely will create a self promotional, virally propagating phenomenon.

Bad Ads – Where Images and Copy in Ads Don’t Always...