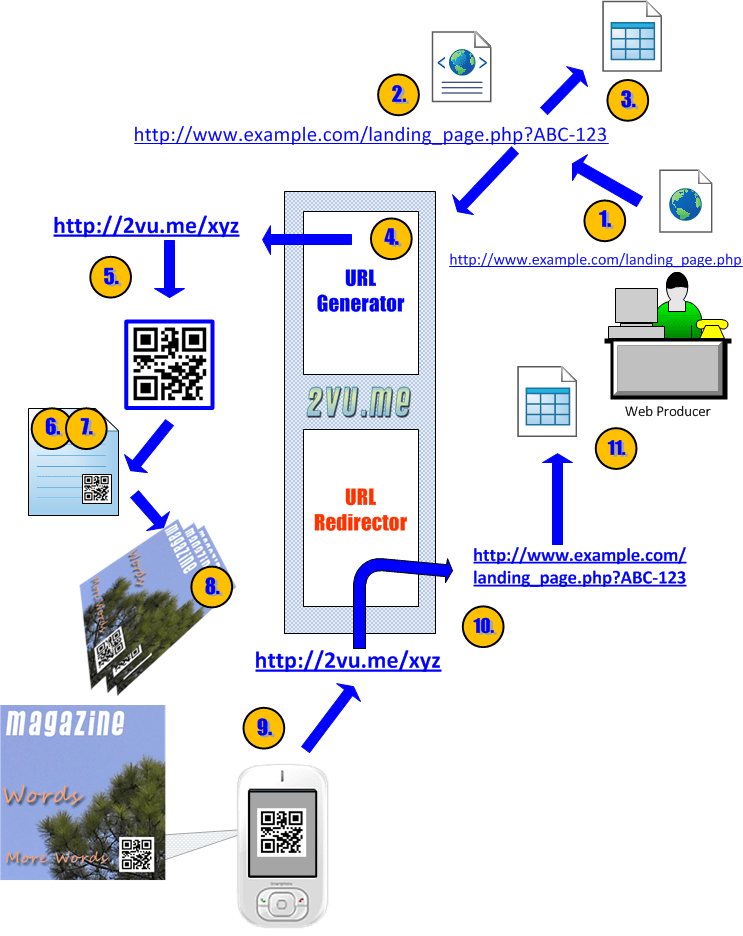 A few years ago advertisers moving towards digital lamented, “Print is dead.” People didn’t stop reading – it’s just that they started doing more of it online and less on paper. Another factor that made advertisers focus of their dollars towards online is the wealth of data that online advertisement yields. It’s hard to know if something is working unless you can get usable feedback from it – with print there was little, with online ads there’s so much.

Online Ad Sales Continue to Increase While Print Ad Sales Decline
Online stole much of the investment that was going to traditional media, maybe not so much from a better sum response, but from simply the novel ability to quantify that response like never before. Absolute granularity in metrics became possible, and many online advertisers, including myself, became caught up in its promise over and above its daily return.

Marketers Became Transfixed With the Feedback Of Online Promotions
It’s a shame too, because many great publications that were filling a vital purpose in their niche, especially for B2B marketing. Some industry vertical magazines reinvented themselves with online versions, but many weren’t able to make the transition or were foolishly waiting for the “online fad to blow over” and their ads sales dwindled. Print just wasn’t attractive as online because it didn’t yield the same quantifiable feedback.

Weren’t vanity URLs working?
Some advertisers turned to shortened URLs and vanity URLs as a way to connect their print with online, less for tagging – more often just to drive response. These tactics rarely perform as well as their online counterparts. As an advertiser, I’m still making and using shortened URLs and vanity URLs, but QR Codes are rapidly becoming the tactic du-jour for URLs in print. Unfortunately too many of the printed QR Codes are done either incorrectly or printed too small and sacrifice effectiveness as a result.

How are QR Codes Being Used in Print Effectively?

I’ve outlined the process that we use at Massive Impressions when we tag a URL and generate a QR Code for it. I’ve even put together a little diagram for visual learners. 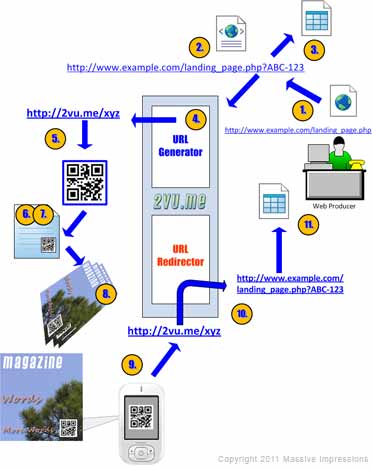 Here’s what we at Massive Impressions do when we’re printing QR Codes in an ad, label, brochure or other type of print piece.

1. We start out with the URL of the landing page we’re promoting, for example:

2. The ad buy is performed and the details of the ad buy and it’s insertions are recorded in our proprietary Ad Information Management System, MI360. Many advertisers, even from major ad houses, don’t have an platform like MI360 and instead depend on spreadsheets for recording their insertion detail. You probably don’t need a big-time management system; if it’s just you then a spreadsheet will probably do.

3. We tag the URL with a tracking code unique to the publication, promotion, creative and other unique delimiters on a per-insertion basis. Let’s say for example that the tracking code we’ve generated from MI360 is “ABC-123” If you’re not using an automated system to generate your tracking codes then you can just make one up as long as it’s unique from other insertion’s tracking codes. This gives us a tagged URL:
https://www.clickwhisperer.com/blog/?p=302&cmp=ABC-123

4. We take this tagged URL and shorten it with  our own shortening domain, 2vu.me. We created our own URL shortener so we can make the shortest URLs possible, and therefore generate the easiest to scan QR codes. You probably don’t have your own URL shortener – so use your can use Bit.ly or Google’s shortener. No publically available URL shortener that I know of makes short enough URLs to get a 21×21 QR Code out of them. This yields a shortened URL like this:
http://2vu.me/Oe

5. Our URL shortener automatically generates a QR Code when it shortens a URL for us, so we don’t really have to do this step at Massive Impressions. To get a QR Code generated you can use Google’s QR Code generator, or use one of the dozens of QR Code generating websites. I won’t plug one over another, but beware – many of these sites connect to the Google API on their backends, depending on the Google API to do their QR generation for them. These sites are simply wrapping a pretty interface on top of what Google’s offering.

Why should you beware? Google’s API cheats you out of one character and will give you a QR code that has more pixels in it than it needs to – and that spells ineffectiveness. Google didn’t follow the QR Code specification exactly – and that’s why we sought more accurate algorithms for 2vu.me. We’re fussy like that.

6. We put the QR Code graphic into the creative for our print pieces. We don’t give it to our artists and expect them to treat the code to spec – we simply tell our artists to leave enough space empty in their designs so that we can place the code.

7. We print out the ad and test it at its publication dimensions on a high-end color laser printer. We scan it with a series of camera enabled phones ranging from old iPhones (2G and 3G) to newer smartphones like the Android LG Thrill. We’ve found that for these older phones to work, the QR code needs to be at least 1 inch wide including the regulation white, empty border, for a 21×21 QR code – larger if the code has more pixels, for example 1.25 inches for a 25×25 and 1.5 inches for a 29×29 code.

8. We send the ad graphics to the magazine or print shop. We don’t have to give them any special instructions as long as we’ve done our jobs right and designed the ad at the correct proportions.

11. Data is collected from several sources: The redirects are performed by 2vu.me. The landing page responses and conversions specific to the insertion are show to us in real-time by MI360. This is mainly because we don’t like waiting around for data. We also, admittedly use Google Analytics as another data source – just to compare it’s numbers with MI360. Due to the way we tag and detect with MI360, our numbers agree precisely with 2vu.me and the lead desks of our clients.

Good luck if you’ve spent a small fortune on other analytics tools and the numbers don’t agree, we’ve been there and done that. That’s why we built MI360 – to establish usable precision and accuracy that the “big guys” couldn’t give us. Their one-size-fits all approach never gave us what we needed to optimize effectiveness with confidence. Sorry guys.

Using metrics unique to each and every insertion, we evaluate the effectiveness of the ads compared to one another. We compare apples to oranges looking at whatever deepest metric we have at the moment. ROI is easy to determine if the sales cycle has a quick turnaround, but something you may not be able to afford waiting around for if your sales cycle is longer. If we can’t get the bottom line ROI we go with Cost per Qualified Lead, or Cost per Conversion. The next time we negotiate an ad buy with that publication we’re armed with the kind of data that ad sales reps hate – we know how much their ad space is really worth TO OUR CLIENTS!

This has resulted in substantial savings to our clients – both in avoiding poor performers and in reducing the costs per ad for publications we’ve seen results from. Don’t count on a publication to tell you how your ads performed – that’s like having the fox watch the hen house. Collect and analyze the data with real-time, non-black box sources – for example your own web server’s log files or an open-data, real-time system like MI360.

So print isn’t dead after all.
It has just been re-born with this new ability to include per-insertion tagging that yields almost all the metrics an online ad does. Honest print publishers rejoice, QR Codes will cause your numbers to speak for themselves; dishonest print publishers who’ve been less than truthful with their circulation and audience demographics will soon be dragged into the sun.

The Unexpected BANG at the End of Your Online Ad Bucks:...