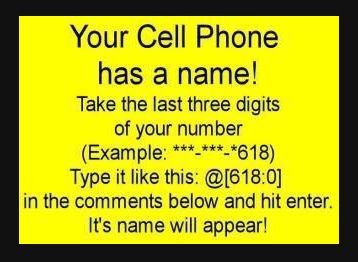 There have been a few fun Facebook hoaxes. One Facebook hoax that was spreading around last night got me, but soon thereafter I figured out what the real deal is. The hoax that got me claimed “Your Cellphone Has a Name”. It involved the post of a single image with text directions inside. The directions read:

Now I though I was a big mobile smarty pants because we’ve done mobile marketing before where I work, at Massive Impressions, but I had no idea what this was about. I, like the good “follower” I am, actually deduced that I’d need my cellphone for it to work. It was out of battery so I plugged it in, waited for it to start up, started up the Facebook for Android app and followed the directions above. My cell phone ends in 332, so I entered: “@[332:0]”

I was so surprised that it worked! My cell phone did have a name: “Kavita Shah” – wow!

Before I was going to believe there’s some universal, hidden naming convention within all cellphones I thought it deserved a little “testing”. Would it work the same on a non-mobile device? On my computer I tried the same thing – and it worked the same. Hmmmm.

What was really going on?
Was this something related to cellphones at all?

This is actually what’s called a “shortcode” in programming terms. It is an abbreviated, unambiguous way to refer to a Facebook Profile by ID number. You could put your number in there instead of the three digit number and it would show your name.

What’s interesting to think about is that there could only be less than 10,000 people who’ve got Profiles with three digit ID numbers. The only way to have gotten such a low number assigned to your Facebook Profile would necessitate your being one of the first Facebook Users. Are these fake Facebook accounts? No. These folks with the three digit profile numbers are probably Mark Zuckerberg’s classmates from Harvard. I’d like to know if my deduction is correct.

Be Careful Of The Mobius Mirror: A Turing Test You Shouldn’t...