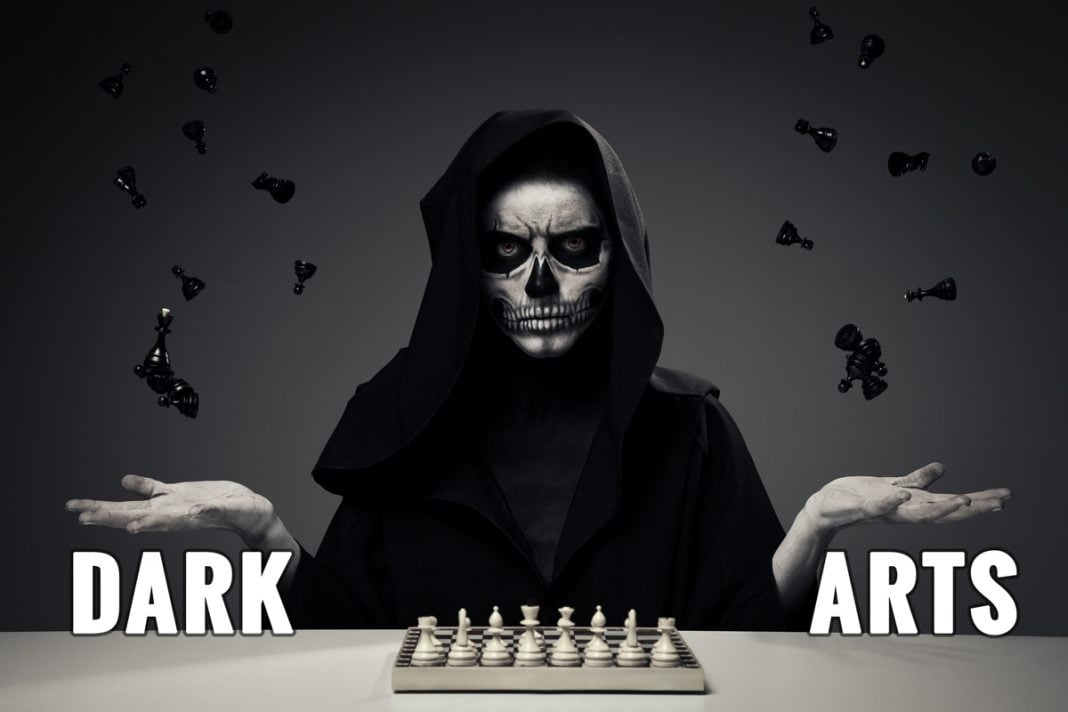 So now you might think The Click Whisperer has gone off the deep end. It sounds really hokey, doesn’t it? Dark Arts? Really? Is he serious? He can’t really mean “spells and magic”, right? Well, read on. This is very serious business.

Understanding how Science and Art are opposites is important. Just as Science yields powerful technologies for us, Art has the power to open our understanding and motivate. The power of Art shouldn’t be taken for granted. As creative as Art can be it can also be destructive. When you understand how it works, there’s no better way to describe it beside calling it Dark Arts. It’s calling it for what it is, not your father’s Art.

Art teachers teach school children on how to create art, to build things, and make new things from their ideas and imaginations. They teach the “light side” of art.

Maybe schools need to start teaching kids that Creative Artists aren’t the only people practicing art. The evidence is clear that Art is too powerful to pretend it’s only about creating. Hindsight is abundant enough to recognize that people need protection, now more than ever, from the undercover artists working the Dark Arts.

It’s easy to recognize the creative arts and it’s a privilege to to own the works of creative artists. Creative artists making works they can have pride in are like scientists proud of their discoveries. Creators and discoverers are mostly proud to have accomplishments in the light. People using science and technology to do heinous things need to hide it, to be covert. Just as Science can be used very destructively, so can Art. We hope that most scientists aren’t using it experiment on us or hurt us. We also hope that people aren’t investing their time into giant fabrications to deceive us, but just as the heinous scientist needs to be covert, so does the heinous artist.

Instead of using art to create, Dark Artists learn how to create fabrications with the intent to destroy. Instead of using it to build new things and inform people, they use their art to corrupt and misinform.

When people think of Art, few think about the Bachelor of Arts recipients learning media, law, ethics and how to frame social issues, the people learning to wield “the other arts.” These alt-artists get overlooked as artists, but artists they are. Science isn’t what they are devoted to. Their craft isn’t tethered to reality or limited by it. 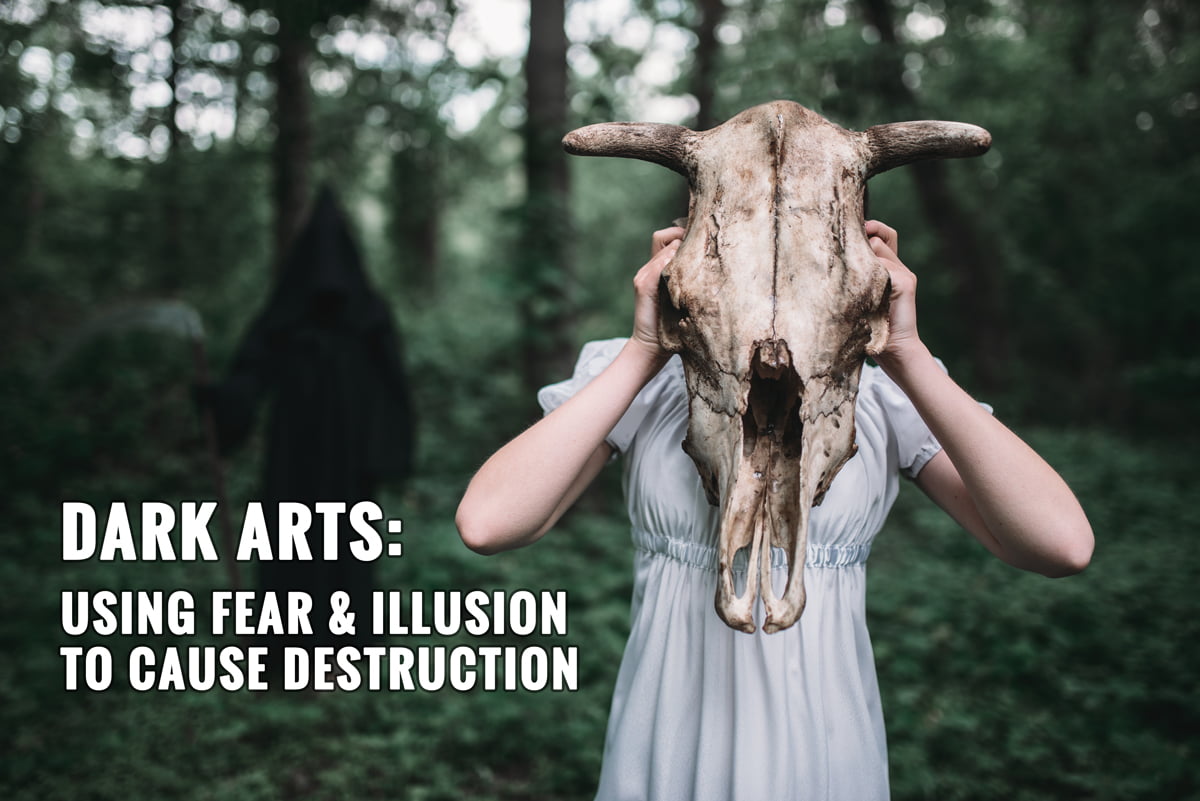 The Technique of Dark Artists: Illusion

Far from being tangible like technology, the tactics and methods of the Dark Arts are no less powerful. Curses are cast, illusions are accepted, trust is betrayed. Fear is the brush. In their wake, these Dark Magicians, they leave destruction. It’s purposefully hard to follow what they’re doing as they do it, and often the most careful and cynical observer will become befuddled in real-time. The Dark Arts are employed to conjure opinion in an audience.

We Are Always Being Beguiled

Right now I hold opinions that were crafted carefully for me. There are opinions that were reinforced and repeated to me with certainty. There are opinions I hold from events I’ve witnessed on television and on the Internet, things chosen for me to see, with the intent to craft my opinion. There are things I’m confident in my understanding of that I am probably completely wrong about. My reality, in part, has been programmed for me by Dark Magicians.

Reality, to them, is subjective. They learn how to make sure the guilty go free, how to package lies, how to label destruction as “development” and degradation as “improvement” with a straight face. Reality, to them, isn’t science-based. It can be whatever they argue it is. All that matters is whether the audience believes it, not whether it’s true. Many feel most accomplished to the degree they can separate their audience from reality.

Dark Illusionists don’t call themselves artists. What they produce they don’t label and show as Art. If they did it would ruin their act, spoil their trick. People wouldn’t believe. An audience who sees a work labeled as Art knows to frame it as fiction, to seek the message, not take it literally. Likewise, they depend on disguise.

Dark arts practitioners seek positions of authority, in business, in media, in government, because accruing credibility is the key reagent of their craft.

Fiction is more easily accepted when it’s served on a platter of official credibility. Harm can even be demanded by an unwitting audience when it’s packaged in the form of care. Dark artists position themselves in places of authority – they can conceal when they’re performing art. They depend on belief in the illusions they create, and to do it their disguise, and identity as artists, cannot be revealed.

They’ll wear the costumes of care, the disguise of science, the uniforms of the stewards of society. They’ll use opinion as if it were absolute, and even lie about science fact if it will be believed by their audience.

Instead of discussing the reality of an issue they’ll instead use the opinions of other authorities to make their case. They’ll point “up the chain” at outside authorities instead of wanting to take ownership of science. They’ll put on a lab coat, play an actor on TV, or pretend to be informed on when they’re in front of a microphone, but they’re loathe to discuss the science.

Science is a fire that burns the costumes away. Science, with logic, is a strong deterrent to the Dark Arts. One who practices science is simply “trying to know” and trying to discover what the truth is. Unlike someone who’s become certain that of an authority’s message, unlike a person who has complete faith, as scientist is someone who doesn’t. In lieu of certainty, a scientist is someone who believes they “don’t know”.

Dark Artists don’t want to delve into details. They’ll claim to have the evidence, have the numbers, but won’t insist on sharing it. Asking them to will typically devolve into cursing, rejection and them abandoning the discussion. If they really cared, they’d love the science, they’d explain their understanding of details. They’d be happy to inform right down to the molecular level or beyond. A scientific understanding of reality aims not to be subjective.

Hindsight is 2020. Now is time to look back and judge the trees of thought we’ve climbed, judge them for the fruit they bear. Now is a time when eyes are being opened in sight is becoming clear. Now is the time to see what we couldn’t before.

Those who follow current events closely may see their moves, but those who don’t will be left befuddled. A working defense, knowing and recognizing Dark Arts, is required to move forward into a more complex and challenging future. More than just our lives will be challenged: what it means to be a human being, the definition of our existence will be tested. Art and Technology naturally emerging from us will put us to the test. Cosmic forces beyond control imposed wild changes on our ancestors. Our environments have forced changes in the past and will do so again, and again.

Creative artists who reveal the intentions and works of Dark Artists have always been in the crosshairs throughout history. Whether they’re hung on a cross or have a needle of heroin jabbed involuntarily into their arm, Creative Artists who’ve pulled back the sheets and revealed the Unseen encounter their demise in the wake of their popularity. Dark Artists destroy people when they can. They’re against good people, they’re against good art. They’re Con-Artists, against real artists who reveal truths.

Celebrate the Creative Artists who produce art. Take the time to learn who they are. Listen to what they’re saying with their art. Support it, share it and show it if it resonates with you, what you want to say.

Recognize the Con-Artists who nurture authority to practice their dark arts of destruction. They’re not hard to find, they’re right where you’d expect them to be.